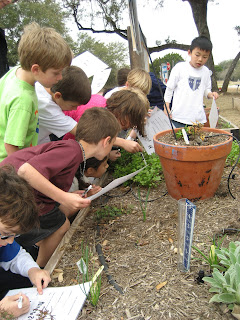 The first graders have been doing a great job of independent observation in the Titan Garden during their weekly visits.  Their first few minutes in the garden are spent noticing things that are new or different and writing them down on their observation sheet to share with the group.  Of course, now is a big time for change in the garden with perennials re-emerging.  Three week ago, most of what they observed was that the plants were dead.  But just three weeks later, many of them comment that the garden “was not all the way dead” and “looks a lot greener”.  And they love seeing all of the daffodil bulbs coming up and putting out beautiful orange, yellow and white flowers.

Last week, we discussed the role that plants play in fairy tales that the classes have been studying, like Jack and the Beanstalk, Cinderella, and the Princess and the Pea.  We observed that you can use the same sequential words (first, next, then, last) that you do in stories to describe life cycles in the garden.  The kids suggested some life cycles that we could describe- trees, plants, insects like caterpillars- and then got to work writing down the sequence of the life cycles.

-First, a butterfly lays an egg.
-Next, the egg hatches to a caterpillar.
-Then, the caterpillar turns into a chrysalis.
-Last, the butterfly emerges.

Welcome to my garden blog. I'm a mom and gardener in Austin, Texas who spends minutes between heeding cries of "I'm hungry", "I have to go pee", and "She's not sharing!" to try and plant something in my garden.I am proud to be a certified Master Gardener in Travis County. You can check out the school garden I help out in at Titan Gardens

Posts from the Titan Garden