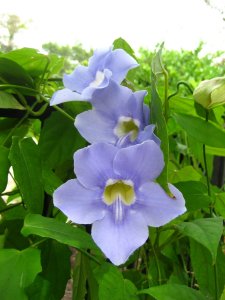 How does my garden know that purple and yellow look so good together. After wandering the garden today and taking photos, I was surprised to notice in my pictures all of the purples and yellows that are out right now. For the first time, my Blue Sky Vine is blooming. Soft purple flowers with yellow throats are cascading off the vine.

Down below the vine, Mexican Mint Marigold is coming out to show off. I have to admit, this plant was in the garden when we bought the house and I have moved it several times. But until this year, I had no idea what it was. Of course, I have heard of Mexican Mint Marigold many times, but I never paid attention to what it looked like. And here, I have had it in my garden the whole time. I divided it this spring when I moved it, so I now have three bunches of it blooming for me. 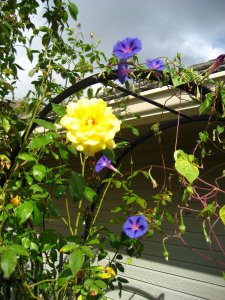 My yellow (“Golden Showers”) climbing rose got very leggy this summer, nothing like the tidal wave of flowers last summer. But the cool weather has woken it up and it has blooms and buds all over. A holdover morning glory from last year has survived and wound up the trellis to accompany the rose blooms. A perfect combination. 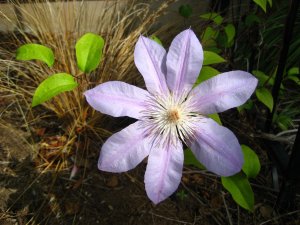 And finally, below the rose, my clematis that has been dragged all over, moved between pot and finally into the ground, has been blooming well in the cooler weather. About 5 inches across and pale purple, it makes me appreciate the cool weather of fall even more. (Of course, I say cool with the highs around 80 today- that IS cool for us, but seems unseasonable warm for November. And STILL no rain. It’s been quite a few weeks. ) 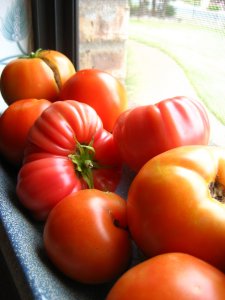 These are the tomatoes I picked earlier this week, ripening on my windowsill. I can not wait for dinner tonight. I WAS going to suggest going out to dinner, because I’m exhausted- but just looking at these babies has made me reconsider.

Here is my basket from today. The Brandywines are really coloring up right now, and even though I am still haunted by my little critter in the garden, I have enough tomatoes higher up that I am getting lots from the Jetsetter as well.

Oh lord, look at this luscious baby. Give her a few days to sweeten up and then she’s all mine.

I admit it, I have a problem. I have too many eggplants. Or I guess I did have a problem until my mom saved me. You see, my family was about to vote me off the island for putting eggplants into too many of our meals. Eggplant parmesan, eggplant curry, eggplant in pasta. Enough already!

But my mom came to my rescue and gave me a taste of Bharta. It’s a really tasty Indian eggplant dip. So now, when I get a good crop, I roast the eggplants (either whole and scrape out the insides or cut them up, roast, then put in food processor), then add tomatoes, onion, turmeric, and lots of other spices. I usually freeze hal and save half for snacking in the fridge. Yummy on crackers or tortilla chips. 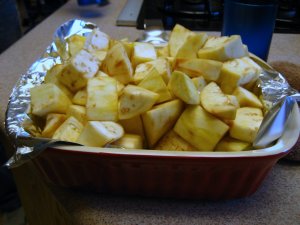 In heavy skillet, add 1/2 c olive oil over medium heat. Once hot, add garlic, onion and ginger. Cook and stir for 2 minutes. Add eggplant mixture until liquid from tomatoes is released and evaporated and mixture is thickened. It should stay in place when moved around in pan. Add 1 tsp garam masala, stir. Season with salt if needed. Take off heat and add 1 tsp lemon juice and 1 tsp fresh cilantro. Serve with pita, chips, crackers, tortilla chips, etc.

I went out for a stroll in my garden on Friday to find, to my dismay, that I had animals in my garden. Acting like it was their home to strut around.

First a peacock came into view. What’s she doing here? I don’t remember inviting any peacocks over.

Oh, I get it, She’s learning to shake her tailfeathers and she wants to be among the colors of a garden to inspire some first-class tail-feather shaking! OK, Ms. Peacock, shake it like you just don’t care. 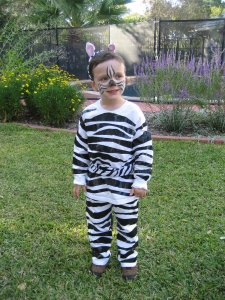 then who should walk in but a zebra! But he doesn’t have any bright colors to match my flowers. “All the better to set off my stripes.” he replied.

He noticed the peacock shaking her booty a bit. “You think that’s tail-shakin’? I’ll show you some tail-shakin’.”

And then wouldn’t you know it, they just settled down in my garden and had a good lon 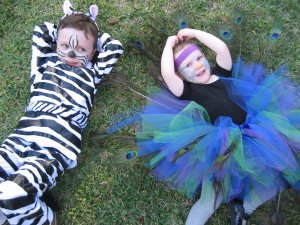 Welcome to my garden blog. I'm a mom and gardener in Austin, Texas who spends minutes between heeding cries of "I'm hungry", "I have to go pee", and "She's not sharing!" to try and plant something in my garden.I am proud to be a certified Master Gardener in Travis County. You can check out the school garden I help out in at Titan Gardens

Posts from the Titan Garden